The most important decision regarding the poem was taken in Edinburgh. I was in a wee library at the tap o Leith walk reading thru the early draft of the poem and was feeling fair chuffed with myself: I aye get this cocky excited feeling when I feel a work of mine is coming together just the way I want it to. The poem was designed as a triptych. One part dealt with me having a mental collapse and falling thru into the future to discover that the earth had recovered from man’s violence, yet human beings were extinct. Another part was a dry analysis of the politics behind nuclear weapons. Another part was a description of dissidents blockading a convoy of nuclear weapons.

Yet the more I looked at the poem the less gallus I felt. Something was wrong with the poem – something did not feel right. Sitting near me was five elderly women. They were discussing whether it was possible tae learn the future fae yir dreams. One wummin was passionate in her poo pooing of this possibility. She was absolutely certain that we lived in a rational world and that magic was for eejits n weans. As I listened to her I understood what was wrong with my poem: it was too ordered, too linear. I was trying to attack the concept of rational thinking that can lead people to create nuclear weapons, to commit acts of mass butchery– yet I was mirroring that very rationality in the structure of the poem.

As an anarchist I realised I had to allow freedom into the very layout of the poem. I also had to have faith in the idea that magic was as real and relevant as the idea of the rational. I borrowed a pair a scissors fae thi library n cut thi poem up, put the bits in a poke, shook thum up n then took thum oot again. What resulted was the shape, which the poem now has. Whilst more editing was done over the next couple of years, that structure has remained unchanged. What was altered was the relationship of poet and poem, with the poem’s shape dictating how thi poet wd respond tae each section.

Anyway, please have a look at abstraction written in response..., see what yi think. Feel free to add yir comments. 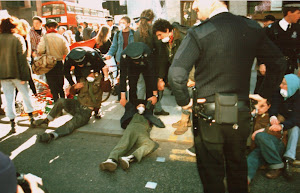 Rab Swannock Fulton
For more on my work as an author, poet, storyteller and tutor, check out: http://rabfultonstories.weebly.com/